There is no strict rule when it comes to cutting your dog’s nails. Although when you hear click-clacking as he walks across the floor or hard surface, it’s usually a sure sign that your dog needs to have its nails cut!

As a general rule, nails of large breeds of dogs should be trimmed less often, as they naturally wear their nails down by walking and playing, especially if the walking involves hard surfaces like concrete. Dogs of smaller breeds on the other hand, which are mostly kept in the house or apartment, need to have their nails cut more often.

As for the cutting itself, I recommend that you do it gradually, rather than cutting the whole nail at once. This is especially important for dogs that have dark pigmented nails, because you can’t see how far the nerves and blood vessels reach. 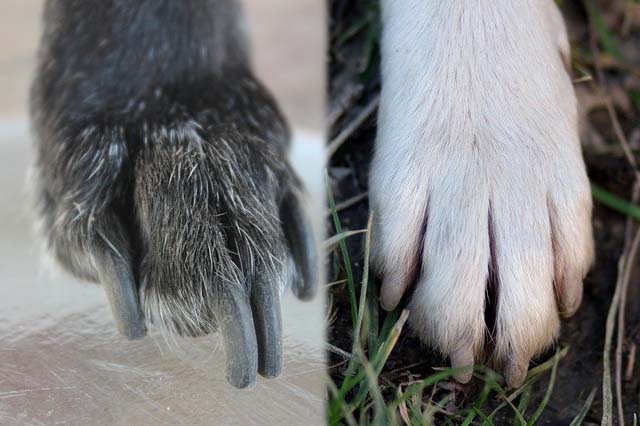 The problem you will most likely encounter (as I do with my Boston terrier) is the dog’s reluctance to allow you to cut their nails.

That’s why it’s important to calm the dog, and associate the claw-cutting ritual with pleasant associations such as food and treats to reward your best friend after an unpleasant session.

After cutting their nails, it’s recommended to gently file the nail. That is of course if the dog has any patience left. If they are still sharp, keep lightly filing until they are smooth.

How to Clip your Puppy’s Nails

Make sure that you have control of your pup when clipping his nails so that he doesn’t move and thus injure himself.

Start by sitting down with your legs crossed. Lay your pup between your legs with his back facing you. Hold his paw firmly, but not too hard, with one hand and the nail trimmer with the other.

Raise their paw just as much as you need and clip the nail one at a time. You only want to cut the curved part, but do it carefully so as not to injure the nerve located in the middle of the nail and cause bleeding and pain.

Never try to cut off the entire excess of your dog’s nail at once, it will be painful for your pet. Be careful not to cut the delicate flesh under the nails.

If you accidentally cut too deep and cause bleeding, you should apply pressure with a sterile compress to that location until the bleeding stops. If you don’t use any preparation, the bleeding should stop after five minutes. No matter how careful you are, injuries often happen.

A general rule of thumb is to clip where the nail makes a defined curve down towards the floor. Don’t cut too far beyond that or you could cut into the quick. Keep in mind that the longer you allow the nails to grow, the longer the quick may grow, as well.

In any case, if you have never done this before, it might be a good idea to get the help of a veterinarian at your infirmary who will show you how it is done properly and also how to determine if the length of your dog’s nails is too long.

Training Your Dog to Accept Getting Their Nails Trimmed

For puppies who are quite young, it’s easiest to do this when they are sleepy, and for puppies over 1 month old – the rule is “one nail, one cookie”.

At first, they will whine as dogs generally don’t like to have their paws touched. However, if you bought your pup from a breeder, they may have already trained the puppy to be handled. Such puppies will have no problem cleaning their ears or touching their paws.

It’s also important that you, as his leader, practice touching paws, muzzle, teeth, ears, tail, and generally their whole body. This will make cutting their nails much easier in the future.

If you have adopted an adult dog who is not used to such a procedure, it will be difficult to teach him to tolerate nail clipping without a fight. But with a lot of patience and rewards, it is possible – unless the dog is traumatized and hostile. If so, it’s better to leave it to the vet.

Use nail trimmers, not ordinary scissors. Some are better suited to small breeds, while others are made with large breeds in mind. Guillotine trimmers (one blade) are better for small breeds because they are small and easy to use on tiny paws.

The “guillotine” has a hole through which you push the nail and the blade which you then press. Dog nail clippers with two cutting edges are better suited for large breeds.

They are larger than guillotine trimmers and are made more like hedge clippers, giving plenty of leverage for large, tough nails. However, in skilled hands either trimmer can be used on any size dog.

Puppy toenails are sometimes soft and extremely small, which makes trimming with regular-sized canine toenail trimmers difficult. The adult-sized trimmers can tear the nail instead of clipping it.

Human fingernail trimmers are helpful, especially on small breeds. Ask your veterinarian to recommend an appropriate size and style for your puppy. When you purchase nail trimmers, also buy styptic powder. Styptic powder is a coagulant that will stop the bleeding if you accidentally trim your pup’s nails too short and nick the quick, the vein inside the nail.

What If I Let My Dog’s Nails Get Too Long?

Nail length affects your dog’s overall body posture. Having long nails can lower the metacarpal bones and phalanges, thus changing the angle at which the paw bones stand.

Changing the angle at which paw stands creates pressure on the joints and can be painful for the dog and even lead to premature arthritis.

It is not only a problem with the paw bones, but the wrong angle also reflects on the dog’s posture, that is, the spine. As you probably know, the body compensates for each injury by positioning it against the sore spot to protect it with its position. Therefore, a leg injury can cause pain on the opposite side of the hip.

You should always make sure that the thumbnail doesn’t grow too long, as it can get caught on clothing or soft surfaces and even pull out of the root, which can be very painful for your dog and even cause a limp or infection.

Also, improperly wrapping such an injury can cause an even bigger problem. So if your dog breaks his toenail longitudinally, it’s best to consult a veterinarian.

Dogs can tolerate pain quite well, especially chronic ones – so we can’t always rely on them to let us know when something is bothering them.