The Ragdoll cat can be described in three words: Big, beautiful, and social. It has a silky, medium length hair, similar to a Persian and Angora cat, a rather large body and a very friendly and cuddle nature, just like a puppy dog. Let’s get to know the characteristics of this fascinating breed of cat.

The beautiful Ragdoll kittens are quiet, very relaxed and very cuddle and attached to their families
Ragdoll has beautiful blue eyes, and comes in many colors and shades
Ragdolls are great cat for families with children
Ragdoll is also known worldwide as ‘gentle giant’ .

1. Ragdoll’s Favorite Activity is Sitting on your Lap

Ragdoll Cats are the happiest in the company of humans and, unlike some other breeds of cats, love to be carried and cuddle.

They are a very obedient breed that always wants to please, and is always focused on its owners, which makes them very easy to train. They quickly learn to walk on a leash, bring the ball, and all sorts of other cool tricks. Ragdoll cats go well with other pets, especially dogs.

2. Ragdoll is a Relatively New Breed of Cat

Ann Baker, a breeder who lived in California during the 1960s, is credited with creating the Ragdoll breed. Baker took a homemade long haired white female cat and mated with another long haired male cat.

It is possible that one of the cats in the original Ragdoll bloodline had the characteristics of a Siamese cat or that Baker mated the first cat with a Burmese or Persian cat. However, as no one knows which Baker breed she used to create Ragdoll, the origin of her distinctive “colorpoint” fur, in which the body is lighter in color than her face, legs, tail, and ears, remains a small mystery. 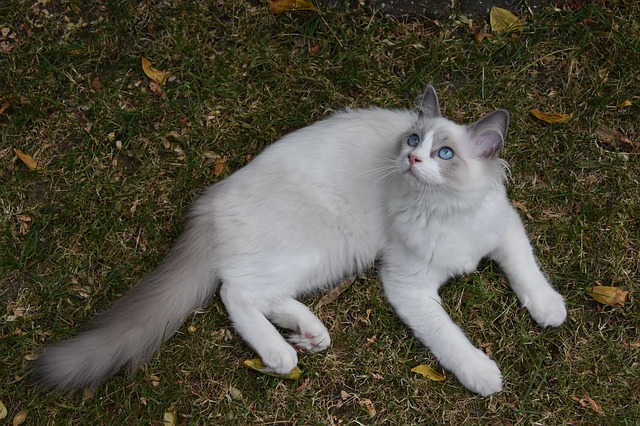 3. Ragdoll’s have Beautiful Blue Eyes, and come in many Colors and Shades

Ragdoll’s come in a variety of shades, from a combination of brown and blue, to red and cream. Combinations such as turtle color and gray and brownish with dark stripes are also common. Their fur comes in several patterns, including the aforementioned “colorpoint” without white fur, two-tone and with white “gloves” on their paws.

4. Ragdoll’s is one of the Largest Breeds of Cats

Ragdoll males weigh between seven and nine pounds on average, and females between four and seven pounds. That weight makes them slightly larger than other large breeds, such as the Maine Coon, which can weigh up to eight pounds, and the Norwegian Forest Cat, which weighs about seven pounds.

They belong to slow-growing breeds, reaching full size and weight at the age of four.

Ragdoll cats are endowed with tenderness and calmness, and immense confidence in the owner. They are a great choice for families with children. These cats are thought to have a high threshold of pain because of their way of relaxing.

However, this is not true and can be fatal for a cat. They are very sensitive to pain and are inherently calmer and more resistant to stress. So be careful not to cause pain to Ragdoll in the game or everyday companionship, because the Ragdoll will not know how to show when she is upset or hurt, unlike other cats.

The reason for their complete relaxation in the hands of the owner lies in their great confidence in the owner and not in the genetic disorder. This gentle and elegant cat loves company and enjoys pampering and combing, is curious and interested in everything that goes on around her.

6. Ragdoll’s are a Lifelong Companion Looking for Attention and Play

Do you want a cat who will accompany you from room to room and sleep with you in bed? Want to play with your cat? Ragdoll might be the perfect choice. Ragdoll sometimes exhibit a behavior more typical of a dog than a cat.

Normally, this cat will meet you at the door to greet you, follow you from room to room, cuddle up to you on the couch and in bed, and wait for you outside the bathroom. They like teddy and tiny toys to carry from room to room.