If you own a German Shepherd, you’ll probably be well aware that when he’s out exercising, he has an impressive turn of pace.

You may have even been given an impromptu workout if he’s ever had the urge to sprint while on the lead. But how fast can a German Shepherd run?

This article will explore that question, going into detail about their running speeds, how they compare with other dogs, reaching and maintaining that speed, and how it can be used.

German Shepherds can run around 30-32 miles per hour, and although not the fastest breed, they are the next fastest behind racing dog breeds.

How Does A German Shepherd’s Speed Compare To Other Dogs?

Compared with out-and-out racing dogs, the German Shepherd – even at full gallop – gets (literally) left behind.

Incredibly, when considering their sizes, horses aren’t much faster than most of these dogs – they run around 44 miles per hour, with the fastest recorded speed of 55 miles per hour.

Having said that, the Germy is hardly a slouch, coming in just a few miles per hour slower than even the paciest breeds.

What Makes German Shepherds So Fast?

If trained correctly, you can expect your German Shepherd to reach the peak of his ability to run at speed at around two-and-a-half years old. After he reaches the age of six, there’s likely to be a gradual drop off. 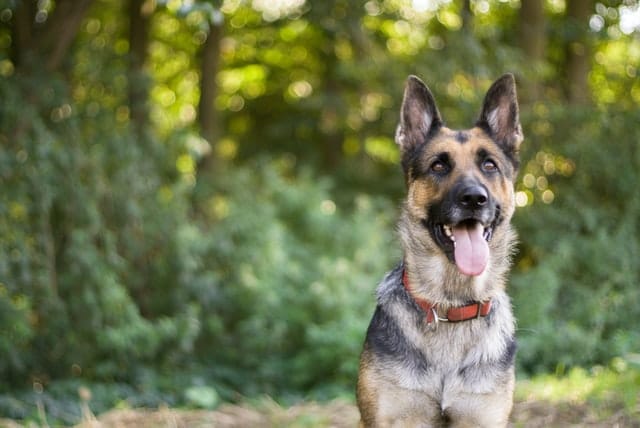 What Can Slow A German Shepherd Down?

Several factors can lead to your a reduction of speed, including:

A combination of a lack of exercise and being overfed can lead to them gaining weight and losing some of their speed. The way to tackle this is to walk them for at least 30 minutes each day and put them on a diet high in protein and low in carbs.

Sometimes, though it may not be immediately apparent, your Germy may have reduced speed because he’s in pain. This could be due to hip dysplasia (which is relatively common in German Shepherds) or another issue, such as muscle spasms and spine compression.

Building them up slowly is the key to him gaining – and maintaining – an impressive running speed. If he has an inactive lifestyle, this is bound to contribute to his overall speed, so giving him regular exercise is imperative.

As with all mammals, once your German Shepherd reaches old age, he’s bound to slow down. This is natural and nothing to be concerned about.

How Can You Increase Your German Shepherd’s Speed?

If you’re concerned your dog doesn’t run as fast as he could, or you’d like to train him to run as quickly as he can, there are several approaches you can try, including:

By regularly walking your dog, you’ll be improving his gait, building his muscle tone, and increasing his heart rate. Combined, all of these things will improve his agility and speed.

Taking your dog for a trot will further increase his energy levels and develop his overall fitness. His stamina will also increase, meaning he’ll be able to run for more extended periods. One option for giving your German Shepherd the opportunity to trot is by cycling and letting him run alongside you.

Training your dog to sprint for 10 seconds at a time and gradually building him up to sprints of between 30 and 45 seconds is a great way to improve his fitness, keep him healthy and, ultimately, increase his speed.

Your German Shepherd’s endurance will increase with regular hiking, while the muscle tone in his legs will improve and give them more power. His lung capacity will also increase, all of which will combine to bring improvements in his speed.

Dogs love swimming, and, in the case of German Shepherds, it’s also a great way to improve his speed. That’s because the exercise will strengthen his joint health, aid muscle growth, and build his agility.

Dogs enjoy playing fetch, and your German Shepherd will be no exception. Throwing a ball, stick, or toy for him to retrieve is a fun way for your dog to increase his muscle tone and energy levels, ultimately increasing his speed.

German Shepherds love having plenty of space to run around, so finding him somewhere he can do this daily will help him develop – and maintain – a good speed.

What To Be Aware Of While Training Your German Shepherd

All of the exercises I described in the previous section help improve your dog’s speed, but there are some things you ought to be mindful of while putting him through his paces. Here are the most important: 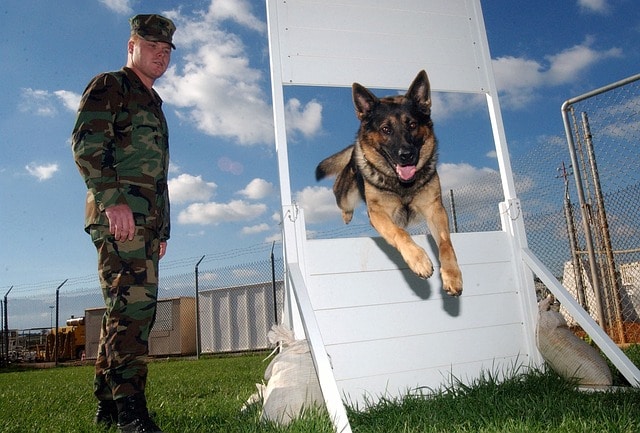 How Can A German Shepherd’s Speed Be Used?

Once your dog has attained its top speed, it’s a good idea to consider what that pace can be used for. German Shepherds are working dogs, and there are several ways his speed can be put to good use, including:

Traditionally, Shepherds have used German Shepherds with herding. With their ability to attain speeds of up to 20 miles per hour for up to 60 minutes at a time, it’s hardly surprising.

They can be trained to herd in trial types. Before doing so, you’ll need to make sure your dog is agile, fit, and healthy, as training of this kind will require him to use his bursts of speed at the correct times.

There are many reasons why German Shepherds are often used as police dogs. These include their protective instinct, meaning they’ll help keep their handlers safe, They also have the ability to adapt to different environments and work in intense, stressful situations.

Their speed is also helpful too, though, when pursuing suspects. That’s because when they are able to reach their optimum speed, they can outpace people relatively easily.

German Shepherds are among the most common dogs used in the military because, similarly to their police work, they possess a number of attributes that can be applied in dangerous, intense situations, including their speed.

Flyball is a sport where teams of dogs race one another over many obstacles while carrying a ball. The long legs and power of a German Shepherd make it an excellent breed for this sport, where it can make full use of its speed.

The answer to this depends on what the dog has been employed to do. If a Germy is pursuing a crime suspect, short bursts of sprinting will be necessary.

However, the German Shepherd’s most efficient speed is actually between 15 and 20 miles per hour. This is one of the reasons this breed is such a good herding dog.

Sustained spells of trotting throughout the day, interspersed with periods of sprinting, make German Shepherd’s perfect for herding. Their ability to maintain speeds of up to 20 miles per hour for so long is one of the main reasons they’ve long been used for this purpose.

So we’ve explored the top speed that a German Shepherd can reach, and how that pace can be utilized. However, for your Germy to reach his potential, several things need to take place – and training him has to be done gradually.

Some things can hamper your Germy’s ability to run at speed, including a poor diet, lack of space, health problems, and old age.

Nevertheless, if approached correctly, there is a good chance your dog can reach an impressive speed of up to 32 miles an hour for several years in his prime.

Even when those years have passed, his agility and stamina can still be useful in other areas, such as herding, where a reduced speed and ability to sprint in short bursts can be put to good use.

Whatever your reason for training your German Shepherd to sprint, this can be a process that’s enjoyable for both you and your dog. Just be prepared to get significantly fitter, as you gradually bring your dog up to his (very) pacy peak!