As dog owners, we all sometimes have to deal with occasional accidents. Thankfully, most of us are able to get our pets house-trained to the point where those accidents are very rare events.

What happens, though, if your dog won’t poop outside? If he isn’t, then he’s most likely pooping inside and that is not only smelly and unhygienic, it is just plain unpleasant!

In this article, I am going to share some tricks that will help stop your dog using your home as its restroom and start pooping outside.

If your dog won’t poop outside, there are only three possible reasons for this:

Let’s now explore each of these reasons in a bit more detail and offer effective solutions that will have your dog pooping in the great outdoors just as nature intended!

Has Your Dog Been House-Trained Effectively?

If your dog has never been house-trained, how can you expect him to know that he is supposed to go outside?

Even if he has been house-trained, how effective was the training? Was he ever pooping outside? Are these accidents indoors a new pattern of behavior?

If the training has been ineffective, you may need to revisit that training in order to get your dog going outside again.

Does Your Dog Have A Medical Condition?

If your dog has been house-trained and was pooping outside previously, has he developed a medical condition?

Dogs sometimes suffer from bad bowels and incontinence just like humans. If you think it may be a medical condition, take your dog to a vet and have him check the animal over.

Before running off to the vet, however, consider what foods you are feeding your pet and whether they might be upsetting his constitution.

Is There A Psychological Reason?

If your dog is just a puppy, there may well be psychological reasons that your dog won’t poop outside. The outside world can be very intimidating for young pups.

Remember, they have a sharp sense of smell and so they can tell when other dogs have recently been present. That may make them afraid to poop anywhere in the vicinity.

That fear may be especially heightened if they spend most of their time indoors.

There might also be some sort of negative trauma that they have previously experienced outside that puts them off going to the toilet, like being attacked by a bigger dog for instance.

Tips To Make Your Dog Poop Outside

Try to establish the cause, from the three possible reasons above as to why your dog is not pooping outside.

Think of it as basic troubleshooting. You need to establish a probable cause before you can start coming up with potential solutions.

If your dog hasn’t been house-trained properly, and he is an older dog, you need to try and establish a routine of going to the same place for him to do his thing, and rewarding him with a treat every time he does so.

Older dogs can learn to poop outside, they just need clearer instructions!

Take Your Dog For A Walk Half-an-Hour After Eating

Dog’s have shorter digestive tracts than humans which means they only normally need the toilet once about ten minutes to half-hour after every meal.

They can hold out for longer but if you time their meals near convenient walking times, they will likely poop on the walk and won’t need to do so again later indoors.

By consistently doing this, they will form a natural association with going out for a walk and going to the toilet. 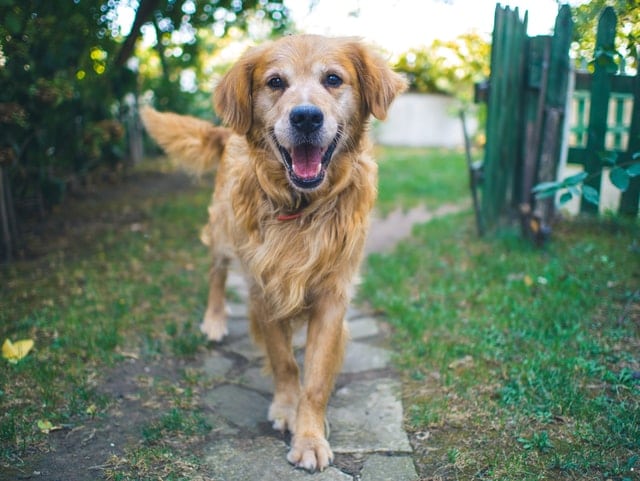 If your dog fails to poop on the walk, don’t let them go indoors. Instead, hold them on the leash near you, so that they don’t sneak off to go somewhere else, then take them out again fifteen or twenty minutes later.

Keep doing this until they poop outside and, more importantly, start making that association with walks.

If your pet is put off by rain or snow, make things a little bit easier for them.

When it is raining, create an impromptu canopy using your coat or an umbrella. If it is snowing, make a patch of grass visible to them by clearing away some of the snow.

Dissuade Your Dog From Going To The Toilet At Night

It’s all well and good getting your dog do his thing outside during the day, but many dogs quickly fall back into old habits during the night.

One potential solution to this is moving your dog’s dinner to an earlier time. If the problem persists during the night you may have to consider using a crate.

Dogs don’t usually poop where they sleep and so won’t normally poop in the crate. Just bear in mind that your dog may get frustrated and noisy being stuck in a crate all night.

When your dog won’t poop outside it can feel like the only solution is to rip your carpets up and cover your floor with washable vinyl.

Try not to despair. A dog of any age can be house-trained, you just have to find the right solution. Hopefully, this article has given you a few ideas and put you on the right track!