If you’ve noticed your cat gagging when he smells food, you might wonder if this behavior is normal? Although most of the time it’s completely normal, in some rare cases there could be some calls for concern which I’ll cover in this article.

Read on to learn more about these possible explanations in detail.

Gagging Because of Smells

There are several explanations for this behavior, but the most likely ones have to do with your kitty’s keen sense of smell.

In felines, much like in humans, the gagging reflex is often triggered when a scent is unbearable. One of the reasons cats are known for being finicky is because they are easily grossed out, which triggers their gag reflex.

Here’s the science behind it. Believe it or not, cats have an average of 70 million olfactory or smell receptors that can detect aromas. To put this into perspective for you, humans only have about 5 million.

For this reason, cats are 14 times more sensitive to strange or threatening odors than we are. This is the most common reason for gagging in cats. If your cat is gagging when you feed him a certain food, try offering him something else.

Although not a common problem, some cats are more likely to gag when smelling wet cat foods. In this situation, they often proceed to eat the food afterward, even though they initially gagged.

This is because wet foods are more aromatic than dry ones. Some people don’t like the smell of pork cooking, but they still eat it.

This is the same concept as cats being temporarily grossed out by their food. Switching to dry cat food can eliminate this irritating before-dinner ritual.

Chicken curry anyone? It’s probably it’s not the cat food that’s the problem. Your cat may love her kibble, but she gags when she smells your cooking.

Don’t be offended, cats have very simple tastes. Canines are carnivores, and they don’t need all the bells and whistles like we do.

Heavily seasoned foods are often offensive to cats due to their highly-developed sense of smell. Your cat wants meat, plain and simple.

It’s not always pure disgust that causes your cat to gag. It could be a food aversion caused by an allergy. What if your cat is allergic to something in his or her food?

An animal’s body has built-in safety mechanisms in place that protect it from dangerous substances. This could be the reason your cat’s gag reflex is being triggered by the thought of eating a seemingly appetizing food.

If he’s turned off by the smell, there’s probably a reason for it. Even though he may still eat it after gagging, try changing to a different food. If your kitty could talk, he’d tell you he’d rather have something else. 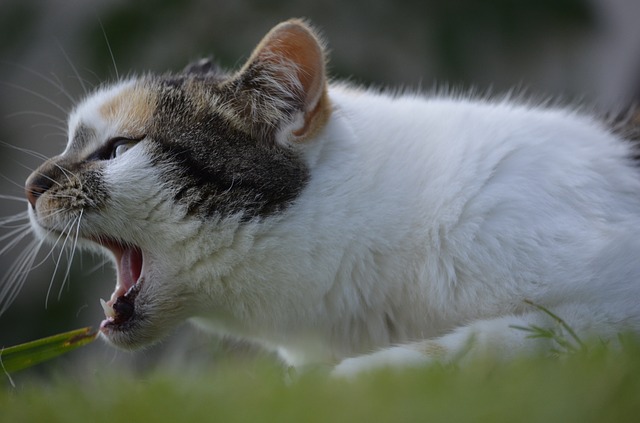 When Should You Worry?

In some rare cases, gagging can be more serious where it might be a sign of an underlying health condition.

Sometimes your cat’s gagging is nothing to laugh about. Asthma and pneumonia are no joke, and unfortunately, cats are susceptible to these serious respiratory diseases.

Occasionally these conditions can cause a reaction that looks and sounds like gagging. It may just be a coincidence that she’s doing it right after you cook or just before eating her food.

If asthma or some other respiratory disease is the culprit, the gagging will be accompanied by sneezing and possibly other symptoms. If that is the case, see a veterinarian.

Heartworm is another serious problem that may cause gagging, but as with other serious medical conditions, it will be accompanied by other symptoms.

This deadly disease is very preventable though, and your veterinarian may recommend a preventative medication, depending on what part of the country you live in. 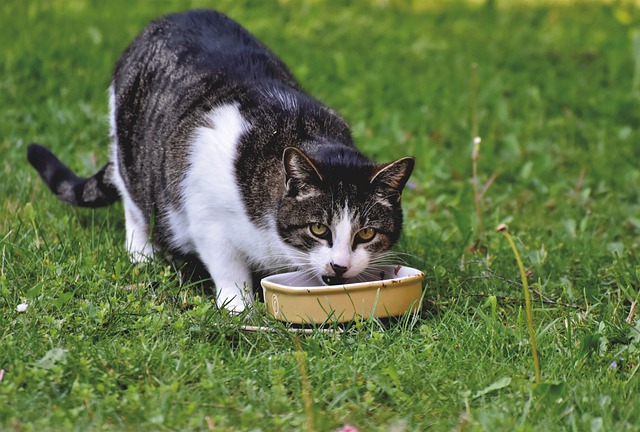 Here are some other less serious possibilities that your cat could be gagging when smelling food.

Unappetizing smells are not always the cause of your fur baby’s gagging. A cat will sometimes “gag” to remove irritants from its larynx.

This type of gagging is not a true dry heave and probably won’t lead to vomiting. The throat-clearing technique that is often confused with true gagging is known as “reverse sneezing.”

In fact, dogs sometimes do the same thing. Think of it as your pet’s way of saying, “Ahem, I need a tissue, but since I’m an animal, I’ll just get rid of this junk in my own way.”

Because cats groom themselves by licking their own fur, they are prone to swallowing too much fur and then expelling it in the form of a “hairball.”

This is normal and not usually cause for alarm. Dry heaving or gagging is part of the process when your feline friend hacks one of those nasty things up. Listening to a cacophony of hacking and retching is just one of the joys of cat ownership.

In all seriousness though, you might want to give your cat a different food that is formulated to prevent hairballs from accumulating in her digestive tract.

Let’s face it, watching your cat puke up a hairball can be off-putting, and rarely, it can and does cause problems for them.

Your cat’s gagging is usually nothing to worry about, even when it produces a small amount of bile.

Chances are, it’s either a reaction to an offensive smell, a food aversion, or just a run-of-the-mill hairball. And if it’s happening when your kitty smells his cat food, you’ll probably have to try another flavor or brand.

I hope this article answered your question, however, if you’re still concerned and suspect the issue is more serious, then it’s best to visit your vet so they can do a proper check-up.