There’s no denying that Boston Terriers and French Bulldogs are an irresistibly charming dog breed. While they look very similar, there are noticeable differences between the two breeds.

Both breeds are great options as pets, with similar physical requirements, pleasant in character and adapted to home life. Their unique snout gives them charm but can also can cause health complications. Dogs with short snouts find it much harder to cool the air that enters their lungs than those with a long snout, and are therefore more susceptible to heatstroke.

If you’re looking for a pet, or just curious and want to know their similarities, then keep reading to learn the differences between the Boston Terrier and French Bulldog!

The Difference Between a Boston Terrier and French Bulldog

Both breeds are both small dogs and similar in size. The Frenchies have muscular builds and larger bone structures, while the Boston Terriers are the more leggy of the two breeds.

Their longer legs give them a slight edge over their Frenchie cousins ​​at approximately 36-41cm tall and weigh 7-13kg, while the French Bulldog’s stocky frame weighs about 8-15kg and 30-33cm tall.

After knowing the physical and behavioral aspects of each of these two breeds of dog, let’s look at some of the main differences between the Boston Terrier and the French Bulldog: 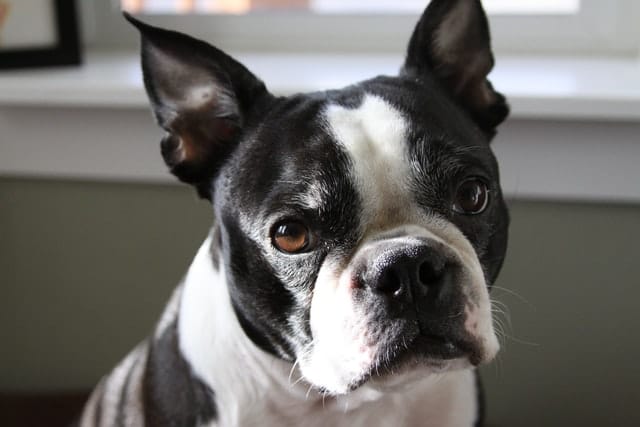 The Boston Terrier was developed in the United States in the late 1800s, crossing between English Bulldogs, White English Terriers, French Bulldogs, and several other breeds. It is the first American breed recognized by the AKC in the early 20th century.

Boston Terriers are one of the most popular dog breeds in the US and some called them “round heads” because of their round skull. The snout is shortened. The eyes are large, round and dark. They have a short body with strong legs. Unlike other breeds of terriers, the tail of this breed is not anchored, but is either straight or distorted.

These white patterns are properly arranged on the muzzle, forehead, skull, around the neck, on the chest, on the front legs, and also on the lower part of the hind legs. These patterns often make it look like these dogs are wearing tuxedos, which is why many call them “American gentlemen.” The hair of the Boston Terrier is short, shiny, and thin and almost does not decline at all. 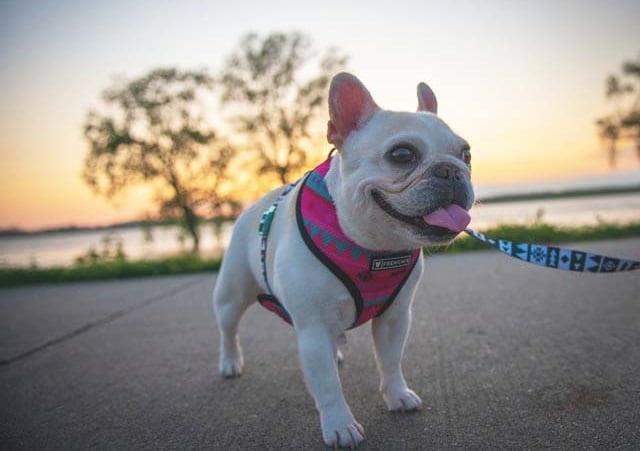 The French Bulldog is originally from England and was originally created by the crossing of a mini English bulldog and a French terrier during 1860. The breed was quite popular with the textile workers of the city of Nottingham, and when many of them emigrated to France during the 19th century, they brought their little bulldogs with them.

This species has become increasingly popular in France and Europe, and its charm was soon discovered by Americans. In the United States, the first specimen was exhibited at the 1896 Westminster Exhibition. The breed was soon nicknamed “the French” and is the name that still bears this breed today.

Temperament of the Boston Terrier and French Bulldog

Boston Terrier: Fun and smart, mild temperament. However, sometimes it can be very stubborn, so training is required to become obedient. Like any dog, the Boston Terrier needs early socialization – making contact with many different people, places, sounds, and experiences when they are young. Socialization means a puppy will grow into an obedient dog.

French Bulldog: Cheerful and obedient, also a great choice for coexistence with children, Very affectionate and trusting in themselves. They do not hesitate to face any obstacle or threat they encounter. The French Bulldog is more laid back than a Boston Terrier. Although they can also be playful they prefer to rest and avoid more physical exertion.

In general, Boston and Frenchies get along well with everyone, including children. However, sometimes in the presence of other dogs, they may be territorial and possessive in their desire to preserve their family for themselves. They like to be the center of attention, which sometimes leads to behavioral problems.

Both breed do not need a lot of space, so they are ideal dogs for smaller apartments. Also, they need a consistent, firm and patient owner. They are excellent security guards and alert their people to the arrival of strangers. They do not tend to bark for no reason which makes them ideal for an apartment.

This difference between the two breeds has less to do with its innate characteristics, more it does with nutritional requirements.

Boston Terrier: Needs balanced and quality food. It can be dry food or canned food, but beware that it is high in lean animal protein.

French Bulldog: Although nourished by foods similar to or equal to Boston’s, it is appropriate to control quantities. The French bulldog will eat whatever you give him and are therefore prone to being overweight. Due to their poor activity, overweight can cause health problems. Because of this, it is advisable to monitor the weight to avoid more serious problems.

Do Boston Terriers and French Bulldogs Have the Same Quality of Health?

Boston Terriers may suffer from brachiocephalic syndrome. Specifically, the Boston Terriers have a head shape that, when combined with a short muzzle, causes breathing problems.

Tip: Given that Boston Terriers often have a number of serious respiratory problems, the use of traditional collars should be avoided. You should use a harness to walk your Boston Terrier.

The eyes of the Boston Terrier require special care, since these dogs are prone to various eye problems, such as glaucoma, corneal ulcers, or cataracts. Cataracts can be hereditary. There is a genetic test to detect hereditary early cataracts.

The birth of a French bulldog can be complicated for the mother, since the puppy is born with a rather large head, often done by cesarean section.

The diseases that can affect them are:

There are multiple ailments to worry about, but the surest way to get a healthy dog ​​is to make sure you purchase it only from a reputable breeder.

As you can see, their physical similarities cause very similar problems in both breeds.

How Much Exercise Do Both Breeds Need?

Boston Terrier: Regular walks and outdoor games or in a spacious safe room required. It is best to avoid the hottest hours in the summer so as not to make breathing difficult.

French Bulldog: They need less exercise than the Boston. Do not force them or they will get tired very soon. It is convenient to make several routes of approximately two km each day, with game episodes.

Bostons also have a tuxedo pattern appearance to their coat, longer legs, and slimmer bodies, versus Frenchie’s squat and more muscular appearance. Bosties can also be more expressive in their face.