This article will talk about the most comment questions, facts, and information regarding Boston terrier ears.

When Do Boston Terrier Ears Stand Up?

Normally your Boston terrier’s ears will stand up naturally within 4 months. This means that you wouldn’t have to crop or tape their ears to enable them to become upright.

Most Boston terrier’s ears start standing up within this period, tend to have lighter and thinner skinned ears. It’s always advisable to wait and see whether or not the floppy ears of your Boston terrier will become upright on their own.

This is so far the only way you’ll be certain whether your Boston terrier floppy ears will require taping or cropping.

Naturally upright ears will prevent problems such as uneven ears due to poor cropping. This is by far, one of the main problems that Boston terriers face. Another problem is re-curling of the ears after they have been cropped. 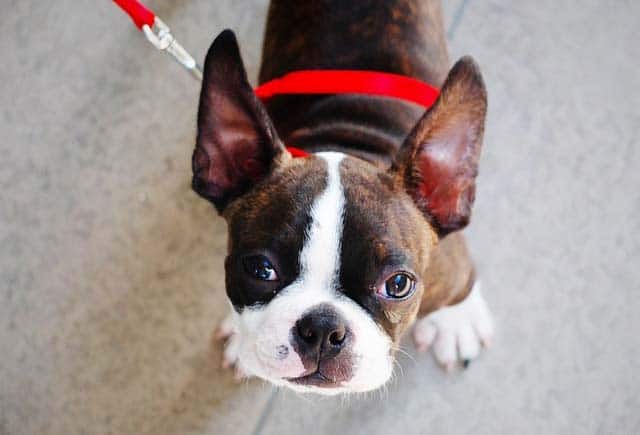 Yes, Boston terrier’s ears are supposed to stand up naturally when they age. This improves air circulation in the ears, and it also reduces infection of the ears. However, this is not always the case.

There are some Boston terriers that grow up without their ears standing up naturally. Whereas other Bosties do take longer, and that might end up causing some damage to the dog before they grow up. Due to such imminent problems, you might be required to turn to other measures that will make the ears stand up.

You might be wondering, what would cause the ears of Boston terriers to remain floppy? Well, in most Boston Terriers, it’s usually due to heavy ears. This is caused by the skin usually found within the ear.

If the skin is leathery and heavy, then you will find your Boston terrier ears remain floppy for quite a long time. This is what will end up delaying their ears to stand up.

Ear Cropping  – Is It Necessary?

Yes, you may need to crop the ears of your Boston terrier if they don’t show signs of standing up on their own. This is a very normal and less painful procedure that involves taking off some part of the ear pinnae. As they recover, the ears are then taped so that they can maintain a certain appearance.

Throughout the process, you will be required to monitor your Boston terrier to ensure a healthy recuperation. You should, however, be informed that it is not a mandatory process. It should only be done to Boston terriers whos ears maintain floppy. 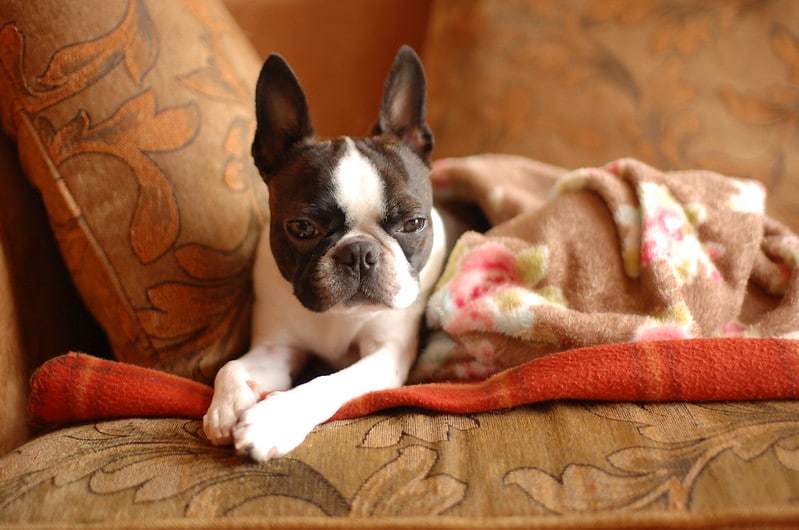 If their ears do stand up on their own, then cropping their ears will be completely unnecessary. You should also check with the rules governing ear cropping in your country before you proceed.

Why? Because some countries have laws that don’t allow ear cropping. Unlike other dogs, the Boston terriers should be cropped when they are a little bit older. After cropping, you’re required to refrain from using large collars.

You should instead go for small collars to prevent the collar from disturbing the ears and causing a break. You may also be required to give it medication so as to prevent infections. If at all you do crop the ears of your Boston terrier, then make sure it is done with a qualified veterinarian.

The moisture found within the ear, especially floppy ones tend to act as the best environment for the organism. This will lead to numerous symptoms such as bad odor, ears discharging and swelling, or redness of the ear canal or the flap. In no time, you will find your Boston terrier’s behavior changing and its playfulness being replaced by depression.

These infections are usually caused by yeast, bacteria, parasites, trauma, or foreign bodies. Once you notice the above symptoms, you should visit the veterinary as soon as possible.

The treatment will depend on the type of infection and the secondary damages done, among other factors. Your Boston terrier may be given antibiotics such as allergy pills and other important drugs to reduce the inflammation.

To prevent your Boston terrier from contracting numerous ear infections, you should make sure that you clean its ears more often. You can also ensure their ears are upright so as to prevent the buildup of moisture. Moisture is known to create the best breeding ground for organisms.

How To Clean Your Boston Terrier’s Ears

Here is a helpful video showing how to properly clean your dog’s ears.

So how do you proceed with the cleaning of your Boston terrier’s ears? Remember, constant cleaning of their ears will prevent your dog from contracting numerous ear infections. It will also help to get rid of the waxy buildup that always occurs with time.

For you to clean your Boston terrier ears without facing numerous resistance, you need to link ear cleaning to something positive. This way, your Boston terrier will always remain calm whenever you want to clean their ears. You will, in turn, have a very easy time getting rid of any dirt or wax in your dog’s ears.

Avoid using swabs of cotton as that will only lead to a painful cleaning process. Instead, use cotton balls. Make sure you don’t go too deep because it could damage your dog’s ear canal.

This process should be done at least once per week, just to be on the safe side. After cleaning, make sure their ears are completely dry, otherwise any moisture may cause the buildup of bacteria.

I hope you’ve learned everything you needed to know regarding Boston Terrier ears. Hopefully, you won’t need to resort to cropping, but as always, if you’re unsure then please consult your vet for advice.